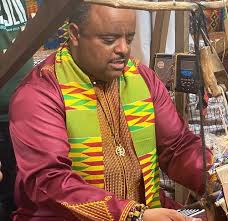 Roland Martin is an award-winning American Journalist who is best known for his work as a Contributor on CNN.  He appeared on a variety of the network’s programs including The Situation Room and Anderson Cooper 360.  He’s also known for work as a Commentator on TV One, Host of News One Now, and The Tom Joyner Morning Show.  Martin currently produces and hosts his own digital series, Roland Martin Unfiltered, where he dives into different topics on issues that concern the African American community.

Martin, travelled to Ghana last year, in December, during the Year of Return for a 10-day trip.  He travelled with a production team with intentions of documenting his experiences in the country.  This was his first time in Ghana since 2008 and he was excited to see how much had changed in Ghana and to share with his audience.

When he arrived in Ghana, he was greeted both by the Year of Return Secretariat and The God Box Foundation, who played host to him while he was in the country.  Martin said he was very interested in capturing stories not only about the ‘Year of Return’, but he also wanted to capture the relationships between Ghanaians and the diaspora communities.  He said “It’s important to break down any communication barriers between our communities because the mindset needs a shift.”  He said that we need to look at how we can help one another instead of operating in a state of seeing our differences.

Martin travelled to different parts of Ghana and experienced the culture, food and history in the country.  It was important for him to create an authentic documentary that he could share with his audience.  He recently announced that he will be airing a 10-part series about his trip to Ghana last year.  The announcement was made on his social media stating that the series would air starting on December 18, 2020.

He was invited to attend the Breakfast Meeting at Kempinski on 27th December 2019, where President Nana Akufo Addo announced the plans for ‘Beyond the Return’ to be the follow-up after Year of Return.  After the announcement, Martin said that the ‘Year of Return’ is really significant and goes beyond the story of slave dungeons. “I really think it’s important for African Americans to know the history of this country, and know the history of other African countries, to really understand and tell their story.”

Tune in to ‘Roland Martin Unfiltered’ from 28th December 2020 to watch his coverage on Ghana.

The 6th Region of Africa Flag Launched in Ghana