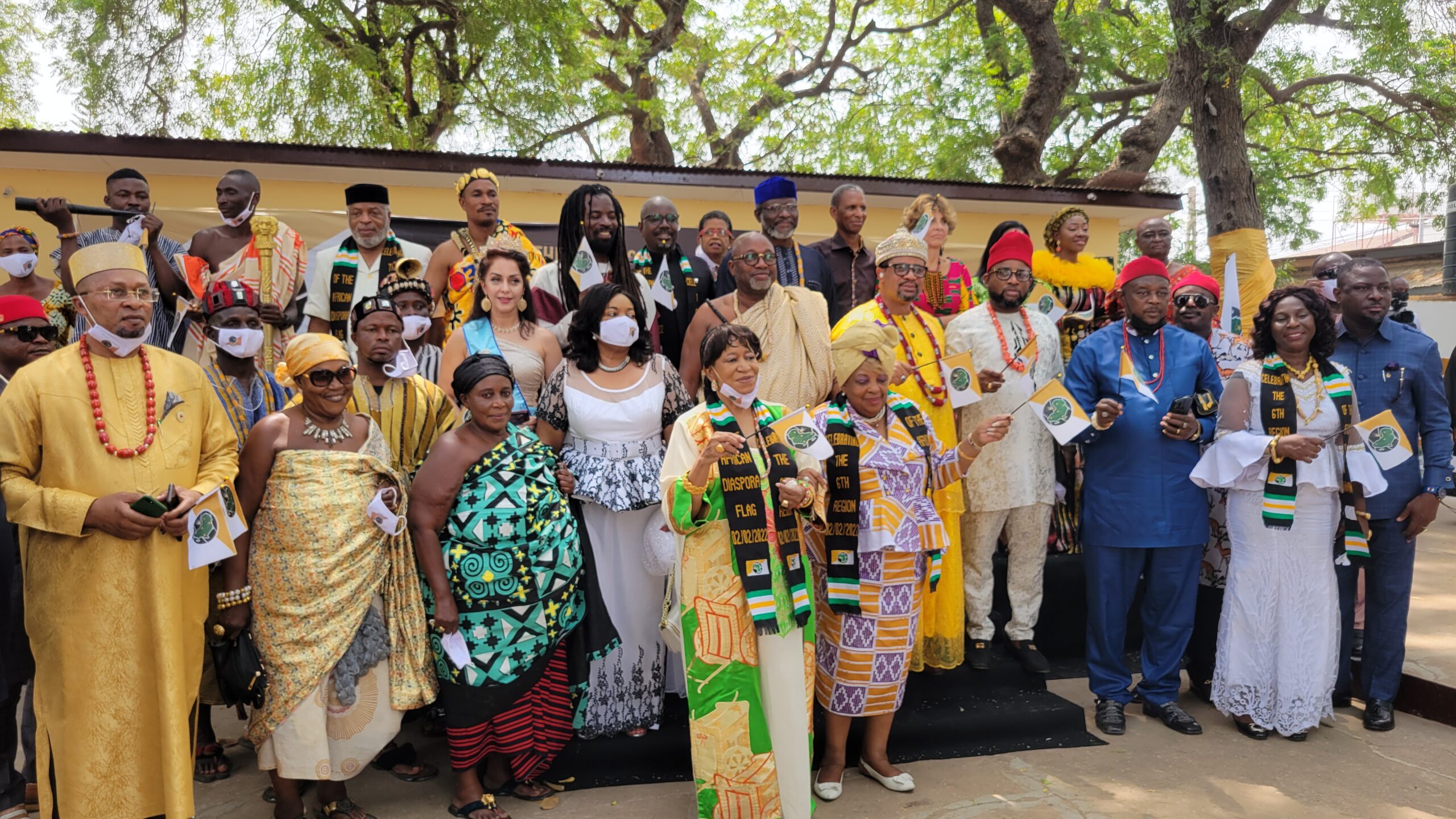 The African Diaspora was officially named as the sixth region of Africa in 2003 by the African Union. This recognized the significance of our the global African diaspora community and also encouraged their participation in the continent of Africa. The historic launch of ‘The 6th Region of Africa Flag’ was on February 2, 2022 at the W.E.B. DuBois Centre in Accra, Ghana. This event was well attended and included representatives of the diplomatic corps, H.E. Erieka Bennett, Founder and Head of Mission at Diaspora African Forum, The Ghana Tourism Authority, The Beyond the Return Secretariat, Diaspora Affairs, Office of the President, Ghana Investment Promotion Centre, traditional leaders and members of the diaspora community.

Deputy CEO of Ghana Investment Promotion Centre, Yao Amoateng Afriyie, spoke on the patronage of the diaspora community in Ghana increasing since the Year of Return in 2019. “This ceremony serves as a catalyst to do more,” he said. “I hope today’s flag raising ceremony will encourage African governments to continue to deepen, and where possible formalize their relationship with the diaspora.”

The official flag was created by Professor Kwame Addo, a Development Architect who has been working in many areas for the development of Africa. He has been dealing with developmental issues and how to integrate all the components of our continent. “The flag, which is first and foremost coming to pose as a source for our identity which is going to give a direction. We should know that this whole trajectory began from the 1900s with all the pan African movements form near and far. It has then metamorphized into today where we can visualize and see a singular symbol which has the African map as its backdrop,” he said. “We now have the diaspora coming from around the world which has been described as a global village.”

The flag features the map of Africa in green with yellow stars within each region; North Africa, East Africa, Southern Africa, West Africa and Central Africa. Lying just outside the continent is the sixth yellow star nestled near central and West Africa representing the diaspora region. This is significant because it shows the connection of the diaspora with the continent and acknowledges them as an important part of its people. Whether they are continental diaspora or the historical diaspora, they are all important when it comes to bridging the gap and development of the continent.

Grammy-Award Nominee Rocky Dawuni also delivered a strong message at the event. “The hoisting of this flag marks the symbolic spiritual return for all our people and also for us to recognize that Africa can never move forward without acknowledging all its parts,” he said. “This moment that we are here celebrating, it’s in line with the vision of our forefathers, forbearers, ancestors. This was the vision of luminaries like Martin Luther King, Marcus Garvey, W.E.B DuBois, whose space we are here celebrating, commemorating this day. Osagyefo Dr. Kwame Nkrumah, Haile Selassie and also vision of our former president, President Kufuor.”

“The launch of the flag of the sixth region of Africa is truly a remarkable and noteworthy attainment,” said the Keynote Speaker, Dr. Chief P.A. Crystal, Director and President of Crystal TV Group. “This shall be a documented reality of our time in history.” He continued by acknowledging former president John Kuffuor as the pillar behind this work in championing the needs of the diaspora community. “My thanks goes to all the presidents of our nation who continue to promote the homecoming of our brothers and sisters in the diaspora.”

The new flag is something tangible for the diaspora to see that Africa has truly embraced them as part of the continent. A symbol of true togetherness with the vision of working together to develop the continent as a global African family.