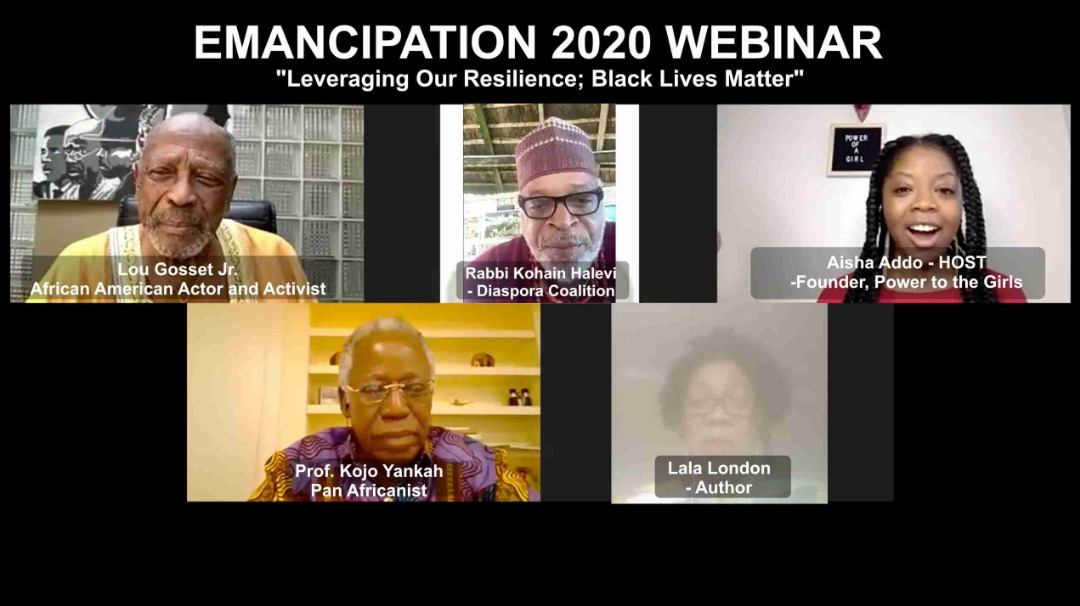 Every year, since 1998, Ghana celebrates Emancipation Day with a series of activities that honour leaders of the Pan African movement and celebrate the day when slavery was abolished in most British Colonies on August 1, 1834. This year, due to the Covid-19 pandemic, and restrictions on crowds and the number of attendees at events, adjustments were made to accommodate and still have significant conversations to learn and grow from our past.

The conversation’ theme was in response to the ongoing racial protests sparked by the death of George Floyd, who was killed by a Minnesota Police Officer in May. Since then, the Black Lives Matter movement has become a global phenomenon working to topple racist institutions in the U.S., Canada, the U.K., and Europe. Black people are standing up and speaking out against the institutionalized racism that exists in law enforcement and other systems.

The notion of Africa as home, is becoming a renewed conversation and the pan African movement has been re-awakened. Professor Kojo Yankah, was the former Chairman of the PANAFEST Foundation for over a decade and has been a part of the pan African movement for most of his career. He said that black lives have mattered from early history when the royal African civilization was destroyed by the Greeks. He said that everything about the black person, the African, was destroyed and it continued through the period of slavery. “The culture of the African was further destroyed, not only by getting the Europeans to put their needs on the head of Africans, but they destroyed the humanity of the African….they were successful in getting the African to feel inferior,” he said.

Lou Gosset Jr. is an award-winning African American Actor and Activist. He is he great-grandson of a slave and took a DNA test that revealed he is of Liberian and Sierra Leonean descent. His role in the 1977 miniseries ‘Roots’ catapulted him to stardom. On the panel discussion he shared his sentiments on the first time he traveled to the continent of Africa. “What I heard about Africa, is nothing in comparison to what I saw,” he said. “I could not wait to go back home and be proud to talk about what I found out.” The way Africa is often portrayed, many first-time visitors are surprised by what they see. He suggested therefore it is important for people in the diaspora to make their own journey and see Africa for themselves to break and dispel the myths.

As someone working in the creative industry of film, he also spoke about the roles he has played and how it is part of the narrative. Yankah added that our history did not start with slavery and it is important for our filmmakers and writers to get to work creating our stories, so we are not so narrow-minded.

Author, Lala London, came to Ghana on a visit from St. Vincent and the Grenadines before the pandemic. Like many travelers, she is in the country until borders open. During the discussion, she said, “My own grandfather was the son of a slave….so these issues are really dear to me.” She spoke of how the Black Lives Matter movement affects her directly, having a son who is an African American. “We see what happens every day in a country that is supposed to be the bastion of democracy…where black lives somehow just don’t matter,” she added.

Moderator Aisha Addo asked the panel what actionable steps can we use to drive the concept of unity and moving forward across the diaspora and in Africa? Rabbi Kohain Halevi answered her saying, “I think we need to set a new paradigm for what a model society should be today….we have to surpass the model in current existence…include respect for human rights.” He continued by explaining that slavery was a mental construct that set a mental state in our people and we need to work towards dismantling that before we can think of reconstructing it.

Mr. Gosset said that we need to work on our communication. Being an elder, he said he sees the importance in that now. Unity is perhaps the most important part of progress in the black community both in Africa and the diaspora. Sometimes we see a division between the African Americans and the continental Africans, and we need to bridge the gap. He added that, “We cannot make it unless we add our Africans to the fight.”

Ms. Addo asked for one power statement from the panelists before wrapping up the Virtual Discussion and Professor Yankah give a meaningful response. “Since we are also commemorating Emancipation, I would like to hammer the point made that we need to get all our creative people to now focus on what we have lost,” Professor Yankah said, “…we need themes that unite and revive the consciousness of our people…in terms of being proud of who we are and raising the consciousness of blackness.”

Rabbi Kohian said that during the season of Emancipation we should remember to emancipate ourselves from mental slavery. “If we are not for ourselves, who will be for us?”

Give Back Ghana Tree Planting for Emancipation Day