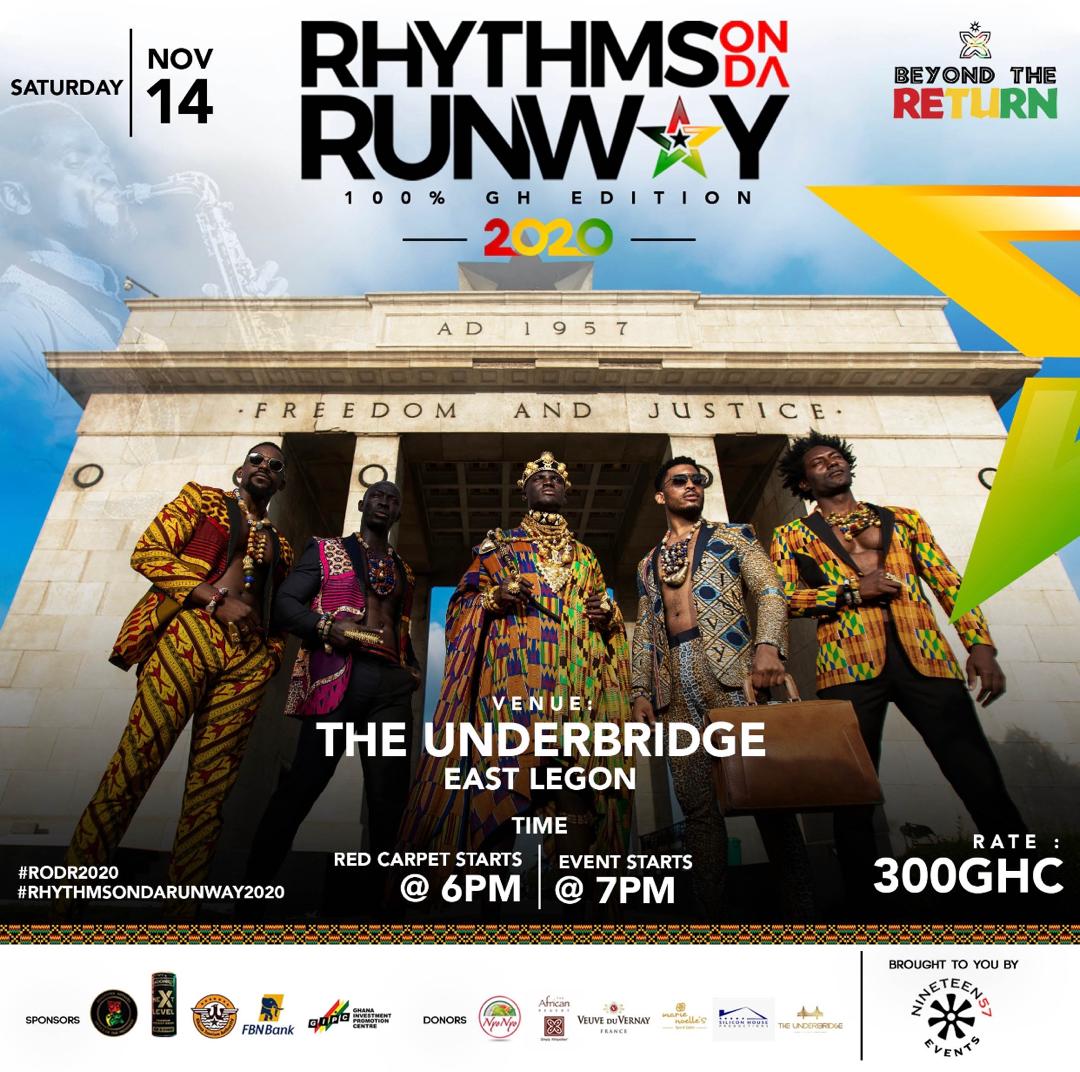 Rhythms on da Runway is officially back for another year.  Media Personality and Fashion Designer Kofi Okyere Darko, popularly known as KOD, is the man behind this brand that has been showcasing African fashion and entertainment for over a decade.  The official launch announcing the upcoming event took place on 8th October on the rooftop at the African Regent Hotel. Many of Ghana’s celebrities and members of the creative industry were in attendance for the high energy event that featured music and entertainment.

Rhythms on da Runway 2020 Edition is set to take place on 14th November 2020 at at The Underground located in East Legon.  This year’s edition is supported by Ghana Tourism Authority and is an officially endorsed ‘Beyond the Return’ event.  With the global pandemic, this year’s event is expected to be on a smaller scale because there will not be designers from other African countries flying in to participate.  There are also limited from the diaspora due to travel restrictions around the world.  This year’s edition is slated to be 100% Ghanaian featuring designers and musicians from across the country.

CEO of Ghana Tourism Authority and Coordinator of ‘Beyond the Return’, Akwasi Agyeman, said that having the event this year shows how resilient we are as a people.  Being and endorsed ‘Beyond the Return’ event, he assured that there will be several editions of the event endorsed over the next 10 years of the ‘Beyond the Return’ initiative.  “We’re quite excited that this year we’re having a 100% Ghanaian program,” he said.  Making mention of Ghana Tourism Authority’s ‘See Ghana, Eat Ghana Wear Ghana, Feel Ghana’ campaign, he said that Rhythms on the Runway fits right into that messaging.

Yvonne Ocloo is the Creative President for RODR and she said they are excited about the upcoming event and are humbled to be able to pull off another show considering the things that have happened this year with the pandemic.  She remembered how exciting last year’s event was and the acknowledgment received from BBC Africa in referring to the show as the “Biggest cultural expose in Africa.”  She made mention that one of this year’s highlights will be the celebration of Ghanaian designer Ricci Osei, father of musician Reggie Rockstone.  He was a cultural innovator who paved the way for many design talents in Ghana today.

Some of the performers scheduled for the show include Kelvyn Boy, Kwabena Kwabena, Efya, King Promise and Kuami Eugene.  Designers who will be showcasing their collections include Chocolate by Kwaku Bediako, Sima Brew, Stepup, Jay Ray Ghartey and others to be announced soon.

Tickets for the event go on sale on 14th October and there are only 200 tickets available. KOD was overwhelmed with how many people attended the launch event and acknowledged that with Covid-19 protocols this year’s event will not be as grand in number.  He said it was going to be tough turning people away because of the limited numbers.  Despite that, he knows this is a momentous occasion to be able to still put on the show.  Akwasi Agyeman said, “We know that this year’s event as small as it will be, it will be another milestone to celebrate.”

GIPC Hosts First Diaspora Breakfast Meeting With ‘Beyond the Return’

Beyond the Return Edition of the 5th Annual Anwamoo Festival