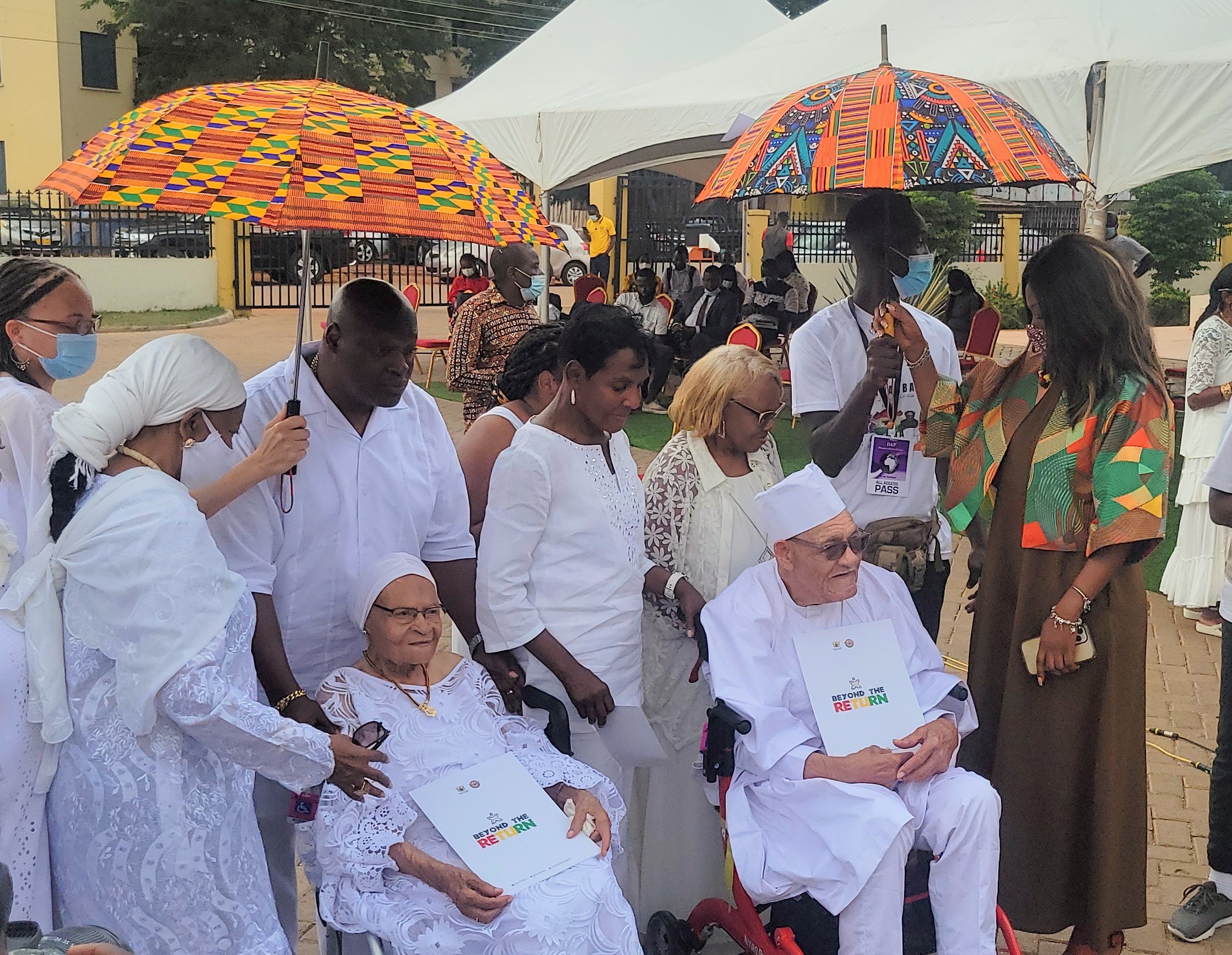 For people of African descent whose families were displaced by the tragedy of the trans-Atlantic Slave trade, a trip to the African continent is more than a vacation.  It’s a spiritual journey to reconnect with their history, feel their ancestors and have a full circle moment.

For two survivors of the 1921 Tulsa Race Massacre, it couldn’t be more complete, than with their journey to Ghana.  The Ministry of Tourism, Arts and Culture, Ghana Tourism Authority Beyond the Return, Diaspora Affairs, Office of the President and the Diaspora Africa Forum, came together with traditional Ga leaders to perform an Official Naming Ceremony for Viola Fletcher, age 107 and her brother Hughes Van Ellis (Uncle Redd), age 100.  All dressed in white to signify their new beginning and participate in the traditional ceremony, their delegation included some of their family members.

The event took place at the Accra Tourist information Centre and was attended by the local community and members of the diaspora.  People present included The Deputy Minister of Tourism Arts and Culture, Mark Okraku-Mantey, Deputy Director of Diaspora Affairs Office of the President, Nadia Adongo Musah, Chairperson of PANAFEST Foundation, Professor Esi Sutherland-Addy, Ambassador Nancy Sam, representatives of Ghana Tourism Authority and members of the African American Association of Ghana.

Travelling at their age, the centenarians were warned not to travel to Africa because they had health issues before their trip.  “They were in the hospital before they came,” said Ambassador Bennett. “They both said the only way they would not come to Ghana is if they were in a coffin. And you see them here, so let’s give them a big standing ovation.”  Everyone rose to their feet in cheers and applause for the two for making the journey.

The ceremony not only had great significance for the two historical icons, but it was greatly symbolic for all people of African descent who came before them.  Rabbi Kohain Halevi, is the executive director of the PANAFEST Foundation and a board member at the Diaspora Africa Forum.  Hei spoke on the significance of this moment, “The very fact that we are here on this occasion, that we have Mother Fletcher and Uncle Redd here that collectively combined represent 207 years of history and experience of our people on the other side in the diaspora and the ancestors have seen fit for them to cross that Atlantic Ocean with their family and come back over here, they have not come alone. They also have come with the ancestral spirits that crossed those waters. That sacrificed for years. That endured, they are the embodiment of the resilience of the African spirit.”

The Deputy Minister of Tourism, Arts, and Culture, Mark Okraku-Mantey, was asked to make remarks before the ceremony. “We appreciate your coming,” he said. “We’ve read about your story, the massacre that went on years ago, we’ve heard of stories like Amadou Diallo who was shot 41 times, but he didn’t have a gun on him. We saw the George Floyd story and so, it is obvious that it is not over and it will not be over until it’s over. So we appreciate those of you who went through all of that for us.  The choice by Madame Fletcher, Uncle Redd and the team, to visit Ghana is a step in the right direction.”

The two were called to approach the podium where the naming ceremony would take place and be officiated by the Osu Alata Mantse, Nii Kwabena Bonnie V.  Mother Fletcher’s Ghanaian name given was Naa Lamiley and Uncle Redd’s name was Nii Lante.  The two were handed their certificates and the pouring of libations and prayers were said in their honour.  After their ceremony was completed, the rest of the delegation was also given their names and certificates. Their journey symbolizes the return of the global African diaspora.  It’s significance is deeply tied to Ghana’s roots in pan-Africanism, the Year of Return and now Beyond the Return initiatives with Ghana inviting the diaspora to return home to Africa.