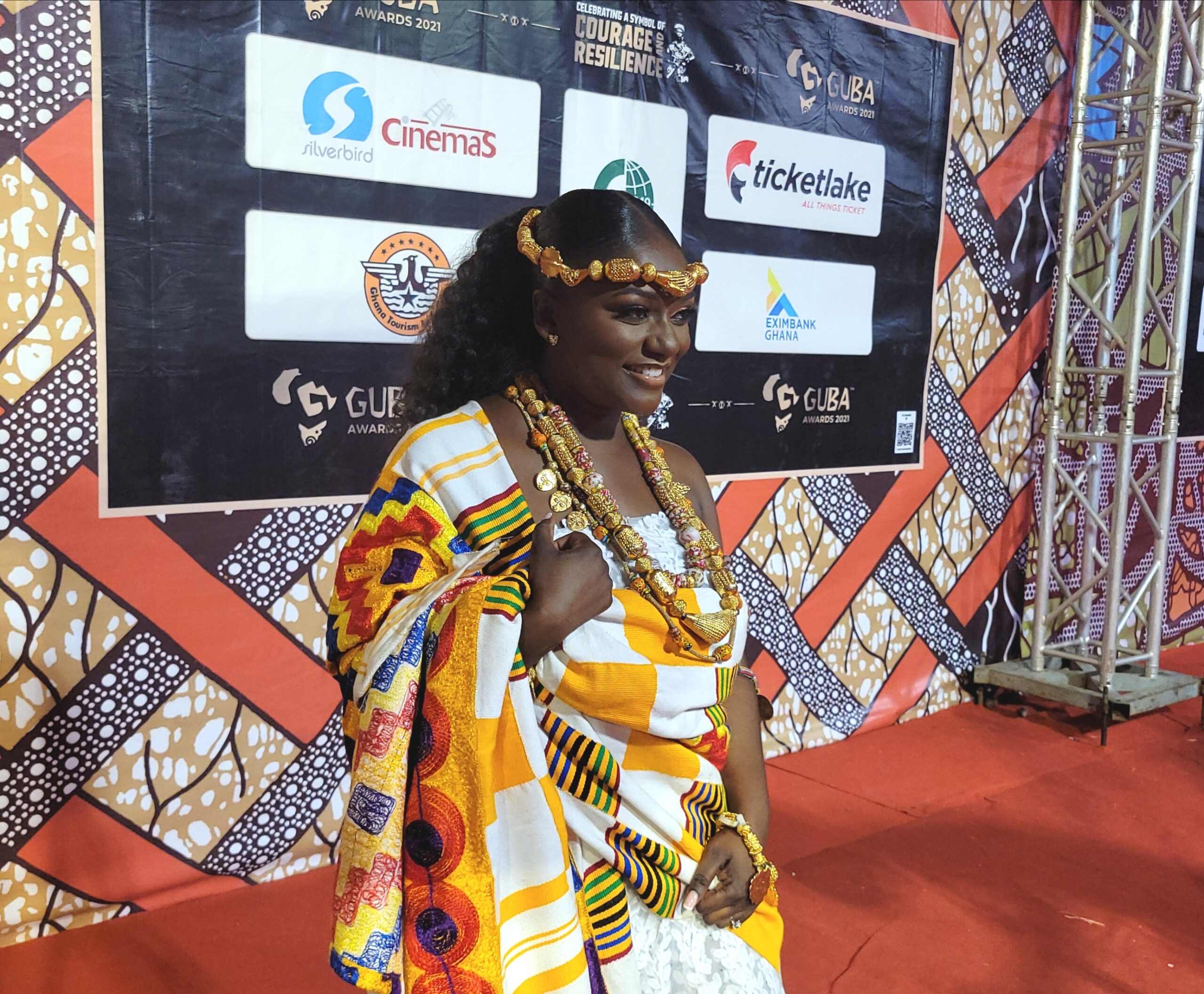 The Dome at the Accra International Conference Centre was host to a spectacular night filled with notable people to celebrate this year’s GUBA Awards which took place on 8th November 2021.  For the first time since its inception, the awards ceremony was held on the continent of Africa.  The aim is to Grow, Unite and Build Africa (GUBA) not only through the awards ceremony, but through countless activities throughout the year.  Over 100 people flew into Accra from all over the world for this year’s event which celebrated the legacy of Yaa Asantewaa, the Ashanti Queen Mother of Ejisu who led a war against the British. The event commemorated 100 years since her death.

Dentaa Amoateng MBE, is the woman behind the event and arrived on the red carpet dressed in traditional regalia and exuded the spirit of Yaa Asentewaa from head to toe.   To honour the legendary warrior woman, the dress code for the event was to wear something Kente.  This was to not only honour her legacy, but to also showcase the brilliant culture of Ghana.  Guests wore Kente that represented the different cultures in Ghana; Ashanti, Ewe and Northern Kente were spotted on everyone.  Whether it was worn from head to toe, or an accent piece, it was a beautiful array of colour showcasing Ghana at its finest.

Amoateng said that the awards this year were close to her heart because she was bringing the event home to Ghana or the first time. The focus of the event was to celebrate the women who are defying the odds and helping to change narratives. “It’s only right that we celebrate the outstanding women of our times,” she said. The theme for this year’s event was ‘Celebrating A Symbol of Courage and Resilience.’  Her Excellency, Rebecca Akufo-Addo, First Lady of Ghana, was in attendance to experience the momentous occasion and presented an award. “Tonight, we are honoured to present the GUBA Nana Yaa Woman of Inspiration Award to Philanthropist, Dina Lee.”

Women are such an important part of African society and have been the backbone of so many families.  It was wonderful that women who are often overlooked, were honoured for the great work they have done to impact their communities and families.  Madam Victoria Oppong, Madam Margaret Adobea Asare, and Madam Maame Pramang were examples of such women who were honoured with the Woman of Spirit Award.

International women were recognized through the ceremony as well including the Bozoma Saint John, who is the Global Chief Marketing Officer at Netflix.  She received a Woman of Impact Award for her work in media development, as a global leader in brand marketing and for being an inspiration to other women in leadership positions. “I am so proud to be here tonight, as has been said, Nana Yaa Asantewa is someone whose legacy goes before us even though she’s in the past. But I know that as I stand in the diaspora at one of the biggest and most influential media companies in the world, I am titled, ‘chief’ and I stand on her legacy every single day in the work that I do.

A special presentation by Ghanaian fashion brands, Christie Brown, Duaba Serwa and Adjasam Apparel featured clothing that represented the essence and spirit of Yaa Asantewaa.  The night’s highlight was the amazing performance of Grammy Award-winning artist Angelique Kidjo, who was also presented with the GUBA Yaa Asantewaa Lifetime Achievement Honour (In World Music).

“Women are an asset of productivity, multiplication and perseverance. Every man organization and country should deem it a mighty blessing to have a virtuous woman,” said Amoateng during her closing address. Nana Yaa Asantewaa, may your soul rest in peace, thank you for everything that you did, for us to be standing here today celebrating 100 years of your legacy.”

The GUBA Yaa Asantewaa Woman of Influence Honour (In Business)

The Yaa Asantewaa Woman of Spirit Honour (In Business)

The GUBA Yaa Asantewaa Woman of Empowerment Honour (In Governance)

The GUBA Yaa Asantewaa Woman of Enlightenment Honour (In Education*

The GUBA Yaa Asantewaa Woman of Distinction Honour (In Health)

Survivors of 1921 Tulsa Race Massacre are Welcomed in Ghana

Dave Chappelle Says He May Open a Comedy Club in Ghana