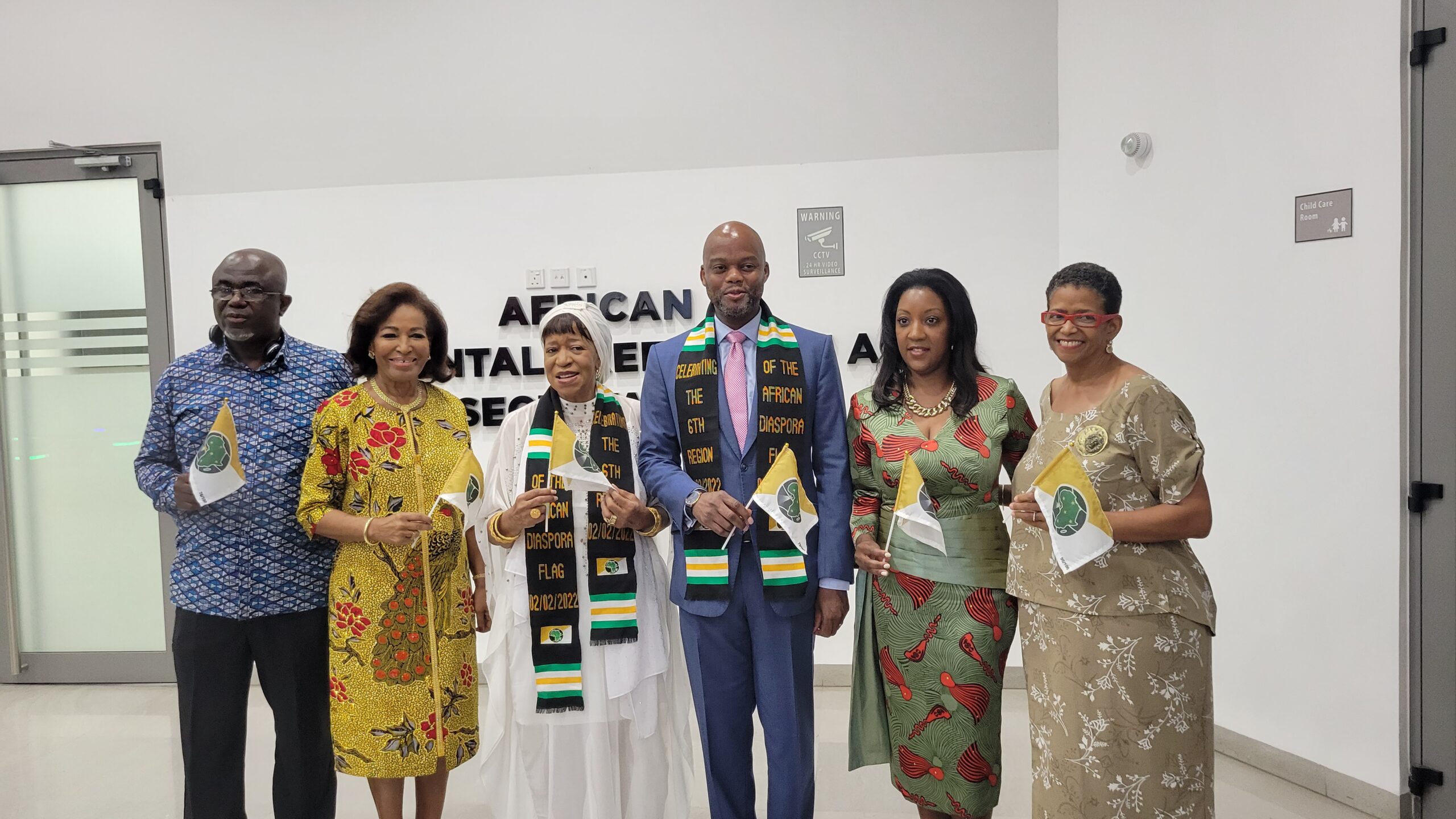 The official presentation and handing over of the 6th Region of Africa Flag took place on April 4, 2022 at the Africa Continental Free Trade Area Secretariat (AfCFTA) in Accra. The Secretary General, H.E. Wamkele Mene was there to formally accept the flag and have it hoisted at the AfCFTA Secretariat among all the other flags of Africa.

Ambassador Erieka Bennett, Founder and Head of Mission at Diaspora African Forum (DAF) thanked everyone for being a part of the historic day. She noted how important it was to acknowledge all those who have supported the vision of including the diaspora as a part of Africa and read a letter from H.E. John Kufuor, Former President of Ghana. “I am very pleased to hear of the planned hoisting of the Diaspora 6th Region flag at the African Continental Free Trade Area Secretariat,” the letter read. “I fully endorse the hoisting of the 6th Region Flag and believe that it represents an important step in the development of the 6th Region.”

Those in attendance of the ceremony included the Head of Office and Representative of UNESCO for Ghana, Abdourahamane Diallo, Deputy Minister of Trade and Industry, Hon. Herbert Kraba, High Commissioner of South Africa to Ghana, Grace Jeanet Mason, Ambassador of Colombia to Ghana, Claudia Turbay Quintero, Co-Founder of DAF, Dr. Toni Luck, and the designer of the flag, Professor Kwame Addo. There were other dignitaries present representing various countries and organizations including Nigeria, Mali, and Libya.

“It is significant that this is happening at the AfCFTA Secretariat,” said Secretary General Mene. “…because we have a historic mission…to dismantle the pattern of trade, colonialist trade patterns that we inherited, it is to dismantle the over reliance on the export of primary commodities to other parts of the world and to make our continent competitive regionally and globally.” He went on to say that Africa won’t be able to achieve the goals without the collaboration and the support of the diaspora through the exchange of technical experiences, exchange of international best practices, and assistance in mobilizing capital. He said we’ve made emotional speeches and aspirations about how we want to work together and that it’s now time for us to do concrete things that are tangible in the advancement of our aspirations.

A summit on trade and investment between Africa and the Caribbean is in the planning stages and the Secretary General said the summit would be convened in the Caribbean. We need to have a structured relationship with the diaspora that identifies specific opportunities for investment and trade. Through the AfCFTA they want to provide platforms and collaborations that will be impactful in the long term.

Ambassador Erieka Bennet officially handed over the flag to Secretary General Mene. After accepting the flag he noted that Ghana is not just a country, but a philosophy and that is something that has been made even more remarkable that the flag was being presented in Ghana, a country that has been known for many decades as being a vanguard of Pan-Africanism.