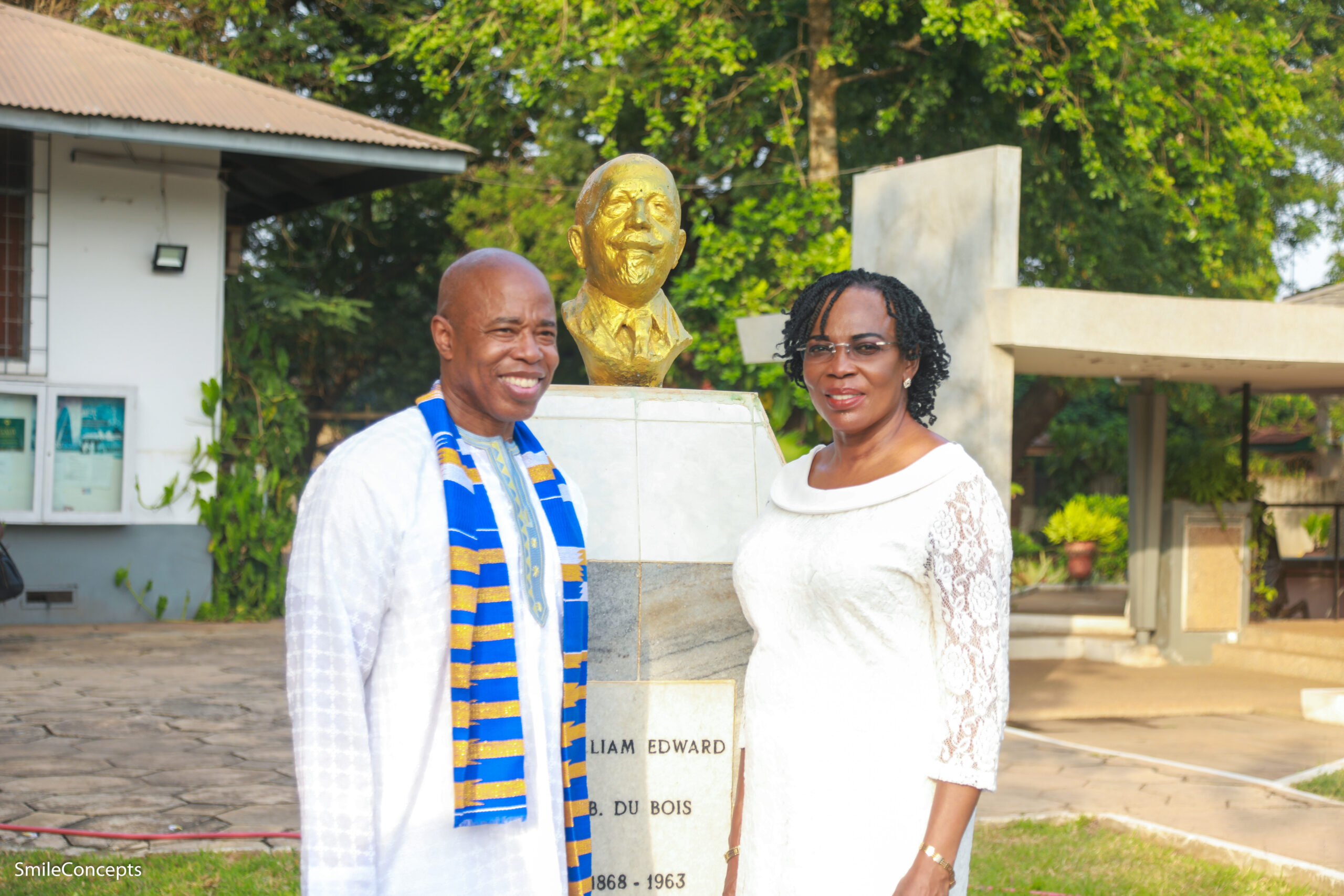 New York City Mayor-elect Eric Adams wrapped up his trip to Ghana yesterday with a visit to the Diaspora African Forum and the W.E.B DuBois Centre.  He made this trip to Ghana despite global concerns over the Omicron Covid-19 variant that has resulted in some African countries being put on travel bans around the world.  “I made a promise to myself that I would visit Ghana following the 400-year anniversary of slavery in America and the election, to show how far we have come and remember how far we still must go,” he told the NY Post before he travelled to Ghana.

With the mayor-elect having sited Ghana’s Year of Return campaign, it was important for the Beyond the Return Secretariat and Ghana Tourism Authority to connect with the incoming mayor during his time in Ghana.  The Diaspora African Forum (DAF) was the setting for a short ceremony that welcomed Mayor-elect Adams and his partner, Tracy Collins.  In attendance at the event were the Mayor of Accra, Elizabeth Sackey, Vice Chairperson of African Union Commission, H.E. Thomas Kwesi Quartey, H.E. Ambassador Erieka Bennett, Director of Beyond the Return Secretariat, Annabelle McKenzie, Head of the Diaspora Coalition, Rabbi Kohain Halevi, President of the African American Association of Ghana, Jessica Ayivor, and members of the diaspora community were in attendance.

Mayor-elect Adams was given the opportunity to honour his mother with a plaque of her name which will be placed on the Sankofa Wall among many other notable people from the continent of Africa and the diaspora.  “This is an extremely significant moment for me. This is a 35-year journey that I am bringing to completion,” Mayor-elect Adams said. While holding the plaque with his mother’s name, Dorothy Mae Adams, he recounted the story about his 1975 arrest in South Jamaica Queens, being assaulted by police officers and his mother’s response to him when he was in the jail cell. “I knew that I sold my mother into emotional slavery because of my actions, and I said someway somehow I was going to buy her freedom back.”  He told the story of becoming a captain in the same department in which he was arrested, to becoming a State Senator, and eventually where he is today. “My mother saw me break the law, she saw me enforce the law and then she saw me go to Albany and write the law,” he continued.

The Sankofa Wall is located on the grounds of the Diaspora African Forum and includes the names of people like Harriet Tubman, Congressman John Robert Lewis, Chadwick Boseman and Bob Marley.  Although there are names of high-profile people, the wall also includes the names of those who never had the chance to return to the soils of Africa.  People place the names of deceased family members who made a significant impact in their lives to honour them.  “Placing her name on this wall among our ancestors is not only the sum of those who are part of their lineage but it’s the sum of our experiences,” Mayor-elect Adams said. “We’re all connected.”

Gifts were presented to the mayor-elect from the African American Association of Ghana.  A Citation was presented by the Director of Beyond the Return and Year of Return, Annabelle McKenzie. “I’m here to present a citation on behalf of Beyond the Return, Ghana Tourism Authority and the Ministry of Tourism, Arts, and Culture,” she said.  Head of the Diaspora Coalition and Member of the Beyond the Return Steering Committee, Rabbi Kohain Halevi joined her in presenting the citation.

The mayor-elect and his wife also had the opportunity to visit the final resting place of Pan-African leader W.E.B. DuBois. After laying a wreath in his honour he shared a few words. “The energy and spirit of our leader who understood the connection between our ancestors here and our ancestors that were born on the soils of America…I’m happy to reunite with his spirit here in Ghana.” Mayor-elect Adams was truly grateful for the day and the accomplishment of making the journey to Ghana.  “I appreciate everyone and the energy here.”

Before leaving the Sankofa Wall he said, “Let’s start the journey so that we can make sure that never again will we allow others to sell us into slavery and never again will we sell ourselves into slavery. We are free,” he said. “So, I thank you, for allowing me to come into a house that I have admired my entire life and to be here and have my mother join this wall you have blessed me.”

Beyond the Return is the follow up to the successful ‘Year of Return 2019’ campaign.  It’s a 10-year initiative with the theme, ‘A Decade of African Renaissance’ with a goal to continue engaging with the global diaspora community.  Its foundation is build on seven pillars that address the needs of of both the diaspora and Ghanaians.  The pillars are Experience Ghana, Celebrate Ghana, Invest in Ghana, Diaspora Pathways to Ghana, Brand Ghana, Promote Pan African Heritage and Innovation, and Give Back Ghana.  For more information on the project visit the website at www.beyondthereturngh.com.